To continue my story, I replaced the battery with a new, and what appears to be a genuine LG battery (if not, then those Chinese are getting good at it).

It worked and booted, but the battery got drained in ~8 hours (100% to 0%). And it felt a tiny bit warm on the cover, just above the battery (battery area was normal). Especially in my pocket it would get quite warm. 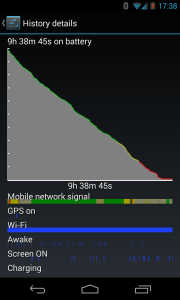 At 0% it wouldn’t turn off though (but it did anyway after about half an hour of being at 0%).

I was hoping that entirely draining the battery a few times would fix whatever it was, but after the 2nd drain, the red light of death popped up again, and I haven’t been able to boot since.

I’ll attempt to RMA it (I don’t know if they’ll notice I swapped the battery, as that would kind of void my warranty… Well done, LG, well done).

Should probably clean the display before taking a picture next time. 😉

I’ve read on XDA-Developers this might be a product error. My girlfriend also has a Nexus 4 (about 3 months old, mine was 5 months), and that one hasn’t caused any problems (although, it seems less smooth, and the battery is drained quicker, than mine).

I’d generally suggest, if you have a red light of death (and it’s not flashing) to just RMA it. Not sure if I’ll ever see my N4 again. 🙁

This is so dissapponting….. Mine just started that this morning and I haven’t been able to get it to charge for the last hour….. It shut off w/an 85% charge…. I think it has something to do w/me hooking it up to a different charger than normal last night…. When I got into my car and put it on the regular car charger, that’s when it shut down w/the Red light…… Also yesterday, it powered off several times when I tried a new gas app….. It worked perfectly fine this morning though…. I’m praying it will turn back on! Did you find a solution?

It’s likely a production fault. I’ve swapped the battery, so it’s definitely not caused by that.
The hardware inside, which takes care of the battery, is probably faulty.

What helped for me (but only for 24 hours) was to open it up, and disconnect the battery for ~5 minutes (causes a hard reset, resets clock etc). However, after working one night the red light came back.

I’ve sent mine back to RMA it. I got it via a seller on Amazon and it’s been 4 weeks now since I’ve send it back. I haven’t really heard anything or got any update from that seller (which is a bit worrying).

how do you actually measure the voltage on the battery as there is a thin strip? Or do I need to try and one the battery itself ??

I used the connectors and a multimeter. I didn’t open the actual battery.

Thanks for your quick response! Which connectors? As the battery has a small strip that plugs into the motherboard on the phone, so did you touch the multimeter leads on that strip or the connectors at the end of the strip..I havent been successul in getting a reading as yet (shows 0V) and hence trying to understand which connectors should I use to check the voltage.

Other potential connectors could be the 4 connectors that are used for wireless charging..So far unsuccessful in getting a reading..(Multimeter is fine though as I just measured DC Voltage across another battery)

The problem seems to be that the wires on the circuit are so thin that its almost impossible to touch them with the multimeter leads,,

Oh yes, I mean disconnect the small strip. And indeed touch with leads on that strip. It’s quite small yes. Perhaps using something thin that you attach to your multimeter leads? Would a needle work?

I don’t remember which connector to use (there are three I think?) but I tried them all until I got a realistic reading.

Thanks Yeri! was able to measure finally 🙂 3.8 Volts..Perhaps would try and charge the battery by stripping off some wire and touching them directly at the connectors..

Good luck. In my case it was the battery charger/hardware that was broken. Even after swapping the battery the voltage went too low and I ended up with the red led.