<Buck> the MPAA site has an interesting anti piracy blitz going on for Christmas
<Buck> they say that they’re protecting users from buying pirated copies of films
<Buck> then they go on to say that you can recognize pirated films by the fact that they’re a lot cheaper, out before or while films are still in theatres, are region free and contain no DRM
<Buck> if I wouldn’t have pirated before.. the MPAA sure has convinced me to do it now 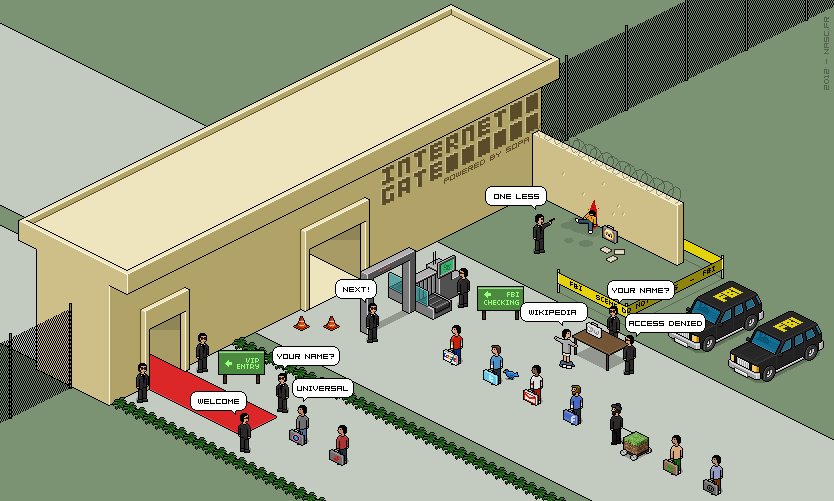 Haha. Better get used to it… 😉

Do not stand for this flagrant abuse of our farcical democracy!

Megaupload has been forcibly closed by the FBI. In a sickening undermining of the people’s will, they are making an example out of an historic, legitimate, useful and well-known website. This is a prophetic glimmer of the coming war against pure free speech- the internet.

This happened once before. Here in the UK, the IWF (Internet Watch Foundation) is a censoring system for the internet. In 1996, the Metropolitan Police started requesting the banning of illegal content by ISPs in the UK. With veiled sly threats they asked that ISPs engage in ‘self-enforcement’ rather than forcing them to enforce the law on them.

Most of the ISPs complied except Demon internet. Demon was a British ISP that contributed to the Open Source community, ran several IRC servers and were pioneers of their time. They objected on the grounds of it being “unacceptable censorship”. A few days later, a tabloid expose appeared in the Observer newspaper alleging that the director of Demon was supplying paedophiles with photographs of children being sexually abused.

Then the police let it be known that during that summer, they were planning a crack-down on an unspecified ISP as a test-case (translation: making an example of them). Between the threats and pressure, the IWF was formed- a supposedly voluntary organisation but in fact a fake-charity and a quango. The IWF is a disgraceful secretive group with an awful corrupt history and no public oversight.

Now we see the same tactic has been used against Megaupload. They are using the threat of violence to coerce companies, how the British police did to create their own laws. The SOPA legislation did not go their way, so they have resulted to immoral tactics of repression.

From ACTA which is decided behind closed European chambers, the DEA which was pushed through undemocratically at alarming speed before elections, evil La Hadopi and now SOPA/PIPA in the US, there is nowhere to run. The nepotists are determined to push through these legislation. At all costs. This is not about piracy- it never was and will not do a thing. It is about control.

We have built a tool. For all their false talk of democracy we have for the first time in history reached this epochal moment. Self determination. If they truly believed in democracy, we could have a direct-democracy tomorrow. The tools exist. Instead we see this flagrant deception. It has become acceptable for politicians to cater to the greatest common denominator. We let them off the hook on the truth like Cameron pretending to be pro-NHS or Obama pretending to be Christian because it is for voters. Since when did it become acceptable to lie! Now today we see this limp-wristed hand wringing by the US president about how he will veto SOPA. Oh shut up.

Was it Gordan Brown who said that voting levels were dangerously low in the below-30s because youngsters today are apolitical. He wanted mandatory attendance for voters. No, we are not apolitical, we are sick of your lies and deceit. This generation is probably more political than any generation in history. In the 80s, only 5% of people in the US were members of organisations. In the 90s, 70% of Americans belonged to some kind of organisation. People are mobilising and prescient of issues.

Libel law is atrociously bad in the UK. Payouts are 10 times greater than in main-land Europe and you get a situation where billionaires use law firms like Carter-Ruck to keep news publishers (which are poor) in court and bleed them dry. Time magazine did an undercover piece of reporting and was sued for libel. They won the case but it ended up costing them $1 million. That’s effectively a fine of $1 million for undercover journalism.

Of course when the law is broken, what do we do? Make more laws! That is why California has brought in anti-SLAPP legislation.

Patent law is so stupid and I won’t even go there.

Copyright is fascist. I find it revolting that we are creating this artificial scarcity where there is none. Everyone could have the Alexandrian library in their back-pocket. It is not the responsibility of these new models to bail out the old ones. The wealth of world knowledge harnessed by parasites.

The biggest copyright lobbyists have their own origins in the bootleg and parody industries. Fox moved west to escape litigious action by Edison’s copyrights. Disney’s original Mickey Mouse cartoons were rip-offs of The Jazz Singer and Buster Keaton’s Steamboat Bill Jr. In fact nearly ever Disney film is a rip-off from popular culture: Mulan, Cinderella, Jungle Book, Little Mermaid, Tarzan, Yet the constant copyright extensions right before it expires for Mickey Mouse has become a twisted joke- termed the Mickey Mouse Copyright Extensions.

Copyright’s own origin is in the 1700s when the English protectorate wanted to protect London publishers from Scottish ones who were printing public domain work. It was a monopolistic law. How then has society somehow brainwashed itself into believing they are anything but? We have the copyright owners for “I have a dream” issuing DMCA takedowns against websites. This is an important historical document- how can copyright be encouraging artists to create when they are DEAD.

This does not have much to do with bitcoin, but I am mad. This free-speech infringement feels so odious and Machiavellian that you cannot stand it, and the only way to stop the machine is to throw yourself under the tracks. The vox populi means nothing under the false pretense of ‘protecting artists’.