Before doing the full reinstall, I took a dump (dd) of my disk.

I ran dd if=/dev/sdb of=backup.img — but this means I can’t mount the disk directly, as it’s not a partition:

I should’ve dd’d /dev/sdb2 instead of the entire disk.

All right, so let’s figure out what can be done… First, let’s look at the content of the image:

So, we can probably mount starting from sector 532480.

Now we can mount the disk using the following command:

And that should do it.

The 2nd partition (the one with data) is now mounted and accessible under /tmp/disk.

5 or so days ago, this error suddenly popped up:

I have a Raspberry Pi, acting as TimeMachine (using afp/Bonjour/Netatalk).

There are several things I tried to solve this, including messing in the sparebundle from Linux (chowning) and deleting my TM .plist. This probably messed up my backup a bit.

But what seemed to ‘solve’ it for me was:

In my case it changed to this error, which happens to me every so often due to corrupt backups (loss of network (because the drive is on VPN, and when I connect to my VPN Mac starts backing up, eventhough I actually don’t really need/want that, it just happens to find the LAN), sleeping at the wrong moment, and Apple just generally not supporting DIY-TimeMachine). So this does mean I have to start from scratch anyhow… 🙁 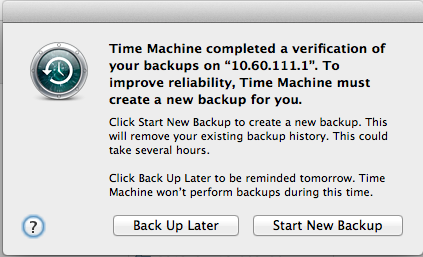 Notes: I’ve tried to manually mount the afp or smb share first, and open  the .sparebundle myself via finder. 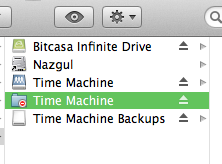 However, both via Finder as via terminal (including sudo) gave permission errors (partly reading, mostly writing) such as:

Used my Raspberry Pi, with an USB disk as TimeMachine. Another disk as NAS/storage. It’s just quite slow… Not sure whether it’s my WiFi or RPi that can’t keep up.

But for now, it’s working.

My own simple rsync backup ‘script’.

You’ll need a rsync server, something to backup, and ssh-agent running to ease the process (or, fill in your password each time).

It will use ssh on port 222 to transfer the files.

Just execute ./.rsync (if that’s the name of your file) to run it.

The file .rsync_exclude is optional, it includes all files or directories that should NOT be uploaded

This is what I have in my .rsync_exclude:

Simple as hell, and yet so handy!